Divine Appointment On The Road 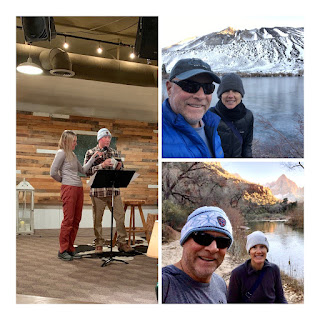 We have been blessed to experience some powerful divine appointments that the Lord has brought our way over the years, sometimes in unusual and unexpected places. One in recent times especially stands out:

We were driving through Utah looking for a place to stay late at night when we pulled up to a motel and the Lord gave me a word: “This is not the place.” I was a bit surprised and a little frustrated because I was tired and wanted to get off the road.

However, it is important to discern that the Lord may have something more than we understand in store, so we continued driving on and came to a place that felt like it was the right place to stop at, which was about an hour later.

The next morning as we were about to leave, I was in the hallway and figured that the Lord probably had some reason for us being there…but still didn’t know what it was.

Then, as I walked along the hallway, I saw one of the motel service maids in the corridor and the Holy Spirit quickened my heart. I looked at her and felt led to ask: “Do you need prayer?”

I was quite surprised when she threw her hands in the air and yelled “Hallelujah!”

She had us come into one of the guest rooms and Mercedes and I laid hands on her and she experienced a powerful move of God, being filled with the Holy Spirit and also experiencing healing and deliverance. She was actually knocked to the ground and came up completely refreshed, renewed, and revived. She stood up and composed herself with a smile that was from ear to ear!

We have also been blessed to lead some people to Christ in this same area, and minister to many others who exist as believers, in the middle of what is a spiritual desert. We felt as though the Lord has had us on an unusual mission many times out there, making raids into a dark land with the Gospel of the Kingdom of God and the power of His Holy Spirit.

We are blessed and amazed when we find ourselves extending the Kingdom of God,  sometimes in unusual and unexpected places, bringing living water to those who are in desperate need and are thirsty and hungry for Christ’s presence! We appreciate your prayers and thank you for considering us in your giving of support as well.

Our old friend Harald Bredesen, who was one of the fathers of the Charismatic Renewal, and one who was also led by the Holy Spirit into many important divine appointments himself, had a rather nice endorsement of our ministry:

Of all the ministries I’ve worked with, there is none that I have the greatest confidence in the purity of the motivation and the fact that it was the Holy Spirit who gave birth to it than Grace World Mission, led by its founders, Bryan and Mercedes Marleaux...I’ve seen the sacrifice; I’ve seen the zeal; I’ve seen the Spirit-ledness…and I am so happy to be a part of it—I hope you will be and will support it... I’m sure He’ll bless you for it.

We greatly appreciate all your prayers and support!

Posted by Bryan Marleaux at 4:02 PM