Thanksgiving Blessings: The Connection of the Reformation to the Early American Colonies

This year marks the 500th anniversary of the Reformation, and as Thanksgiving rolls around, we're taking a moment to look back and see the role the Reformation played in the early origins of America. It was quite a large one, in fact, as The History Channel so pointedly declared on a program about this event: “Without the Protestant Reformation there would be no America.” Quite a statement, so let’s take a look at some of the background:

Though it took some time, the Protestant Reformation eventually began to spread into England during the 16th century. Luther’s Ninety-Five Theses had hit the nail on the head among the European population regarding the abuses of the Catholic Church, and an outcry and demand for reform began to spread to many places.

As a desire for a return to New Testament-based Christianity crossed the Channel into England, Cambridge University began to be known as “The Little Wittenberg” because topics like Luther, the New Testament, and teaching on grace and faith, were so commonly being discussed there.

Amongst those converted to Christ during this time was a Catholic priest named William Tyndale who would, like Luther, champion reform and go on to translate the New Testament into a language that people could actually read (the Catholic Church had said, on pain of death, that the Bible was only to be in Latin, a long dead language even then). Tyndale himself transferred from Oxford to Cambridge because of the openness to reform there. He would end up giving his life for his endeavor of translating the Bible into English and was martyred.

Diverse Protestant groups arose in England including a revival movement called the Puritans. The name did not imply they were trying to be purer than others but rather they sought a return to the pure teaching of the New Testament and sought to purify the Church of unbiblical teachings and papal abuses.

Puritans held to the same basic evangelical core beliefs of most reformed believers: Salvation by grace alone, through faith alone, in Jesus Christ alone, the only mediator between God and man; the same fundamental New Testament belief that had brought Luther to his conversion after reading the New Testament.

The Puritans, however, also taught that Christ must dwell in, and fill the heart of the believer, mere acquiescence to a doctrinal statement wasn’t sufficient. Christ must dwell in our hearts for mere head knowledge doesn’t replace that living relationship. They thus sought to walk with Christ and were amongst what you could call the first Protestant mystics.

Puritans and their name, however, have been mostly misrepresented; for example:

They were not prudish, dourly dressed prigs, but were actually known to embrace the fashion of the times, and in the colonies often dressed very colorfully.

Also, contrary to popular thought, they were not uptight killjoys who preached against sex, but actually were the first Protestant group to openly espouse that the sexual union between man and wife is a gift of God to be enjoyed with pleasure. They disdained the false concept from Catholicism that sexual union in marriage was only for procreation and a sin if you enjoyed it. Sex, between a married man and woman, was a gift from God to be enjoyed in the bonds of matrimony. They typically had hordes of children as a result.

Furthermore, they despised the Catholic notion that celibacy was some kind of higher calling or that one was more holy by being celibate rather than being married. Christ’s blood alone cleanses us from sin, and makes anyone who believes on Him holy before the Father, clothed in the righteousness of Christ, by grace through faith alone! Nothing more and nothing less! (Rom 3:21, Eph 2:8-10, Heb 10:10)

England felt less tolerant to the Puritans as time went on and a group of them sought to find freedom to worship as they saw fit and departed for the New World on a ship called the Mayflower in 1620.

Once across the sea, they dedicated their new colony “to the glory of God and the advancement of the Christian faith” in their compact when they reached the shores of Plymouth, even before disembarking the ship and stepping foot on the new world, setting down roots that are clearly Christian!

Historian Latourette says that the Protestant movements that came to early America sought to incorporate Luther’s Protestant teaching on the priesthood of all believers into the basic ethic of life—equality for all—something that had been completely foreign in old feudal Europe, and foreign to the elitism that was intrinsic in heirarchical Catholic religious system .

This concept of human equality before God that Luther drew from the New Testament became a concept in the later American Constitution: “All men are created equal and endowed by their Creator with certain inalienable rights.” Historian Sydney Ahlstrom estimates that 70% of the signers of the Declaration of Independence were of Puritan stock.

We were blessed to visit the Puritan church where Benjamin Franklin himself was baptized, while in Boston on a trip a little while ago. It caused us to reflect on such a historical place, looking around there and at the Boston Common, where massive crowds would gather during the revival in the early colonies to hear the preaching of George Whitfield. Benjamin Franklin himself was fascinated by this phenomenon and measured the crowds at approximately 25,000 people who came out to these revival meetings!


We also had another very historical moment just recently in Germany:

October 31st, 2017 was the 500-Year Anniversary of the Protestant Reformation. We were blessed to be in Wittenberg, Germany, for the quincentennial celebration.

The little town ended up being packed with people from all over the world for the celebration of this very momentous event. We ended up having to stay in another town because everything had been booked up far in advance with all the people visiting for the big event.

We were stoked to find out the place we were staying had bikes to rent at a very reasonable price. We figured the 35 mi (56 km) round trip adventure would be good exercise after so many planes, trains, and automobiles on this trip.

So we got up early on the 31st and started biking towards Wittenberg. We passed through some quaint little German towns and farms and enjoyed taking in the sights; however, it seemed like every last store and place of business we passed was closed. We found out later that Oct 31st had been declared a national holiday for all of Germany for the first time in its history.

Then, as we were getting closer to Wittenberg, a huge group of black cars and police with a helicopter hovering overhead, passed by us. We hadn’t known that the Chancellor of Germany, Angela Merkel, would be heading into the Reformation city for a special service. Because we were on bikes we got a unique view of all this as we rode in. 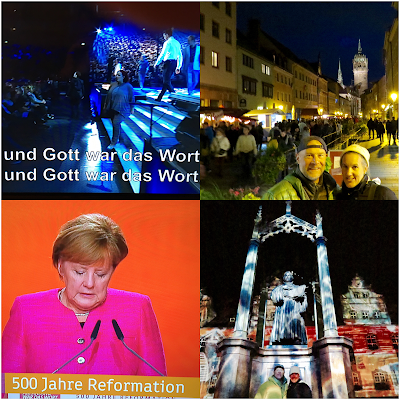 It was a blessed time to be there and we had lots of divine appointments with many different people whom we shared with and prayed for as we were equipped to share quotes from Luther and the Bible about the importance of being filled with the Holy Spirit!

There were many special events going on, including many special museum exhibitions, as well as a sound and light show, and a huge panorama exhibition on Luther and the town of Wittenberg by a well-known artist. There was also a big musical play about Luther in Berlin which was broadcast nationwide and actually quoted many Bible verses throughout!

It was quite a unique moment for sure and we believe the Lord was using this occasion to plant many seeds in people’s lives about the Gospel as well as draw many to Himself!


Luther is often called the "accidental revolutionary" because of the amazing chain of events that were set in motion by this then unknown monk in a little insignificant town who was touched by the Holy Spirit as he read the truth of the Gospel in the Scriptures. That truth reverberated throughout the land and even crossed the sea with those early Pilgrims coming to the New World, a place that would later be called the United States of America.

Posted by Bryan Marleaux at 4:10 PM