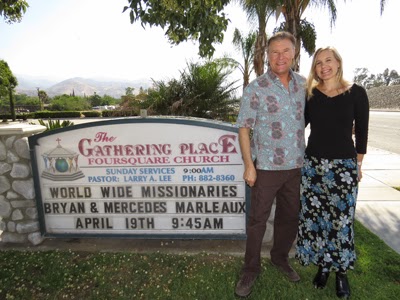 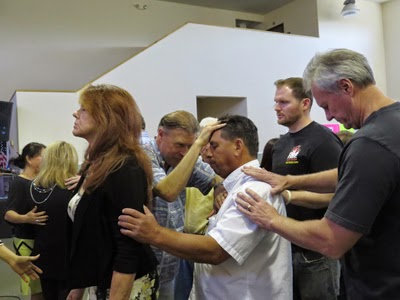 While ministering at some different meetings just recently the Lord has been moving very powerfully.

We were praying for some people at a church in Chula Vista and the Lord gave me a word of knowledge that someone with an ear condition needed prayer.  A woman came forward, we prayed for her and God touched her very powerfully. Tears streamed down her face as she was overcome by the Lord’s presence and fell down. She shared with us after the meeting that for four years she’d had buzzing in her ear continually.  When we prayed for her the Lord came over her in power and the buzzing stopped and she was healed! Praise God! The Lord also gave me a word for a shoulder condition and the pastor responded to this word and was touched powerfully by the Lord’s presence and felt healing take place in her shoulder.

At the same time that we began praying for her and others, a man in the meeting saw a vision of God’s fire flowing down from the throne when we had begun to pray for the people.  He said it engulfed the people as we laid hands on them and like in Acts chapter 2 at the Day of Pentecost the fire came and rested on them, releasing the Lord’s power.  Glory!

We just ministered out in San Bernardino where we experienced the Lord meet us in wonderful renewing power. God touched and filled many deeply and the Pastor said he felt it was like a new beginning. The Holy Spirit just brought waves of refreshing and healing as we ministered also out in Anaheim where we were blessed to see the Holy Spirit just keep pouring out on people long after the meeting was over—wasn’t over for the Lord though or us, as God just kept ministering healing, grace, power and love long into what became the afternoon—the meeting had started at nine in the morning, but praise God when His glory fills the place, you can lose track of time!

We appreciate you keeping us in prayer and do thank you for your support  as we head out this week on yet another mission adventure!

Much love and blessings!


Bryan, Mercedes, and Patrick Marleaux
Posted by Bryan Marleaux at 3:05 PM No comments: