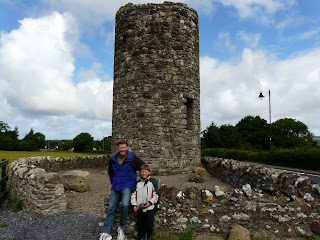 Tower named after Columcille
in County Donegal, Ireland
One of St. Patrick’s spiritual descendants who had a similar impact as a pioneer missionary was Columcille (in Gaelic) also known as Columba (anglicized.) Much like Patrick, he crossed a treacherous sea to bring the Gospel to a foreign people, only Columcille did it in a curagh, a small, open boat made of hide and wood, and this going all the way from Ireland to Scotland in some pretty heavy seas in a tiny vessel.
Columcille, who was known for having a temper, had instigated a battle in his native Ireland where a large number of people were killed, something in the neighborhood of 5,000. Lamenting his involvement, he cried out to God that he wanted to spend the rest of his life seeing at least as many souls saved as were killed in the battle.
After being banished for his involvement in the battle—let’s not forget about Moses’ killing of an Egyptian and subsequent exile, as well as David’s time in exile—he was moved by the love and mercy of Christ and headed off from the coast of Ireland with some companions to reach the Picts in the land of Scotland.
As Columba sought to reach out to the tribe of the Picts in Scotland, he soon encountered opposition from Druids, just as Patrick had in Ireland, as well as from Brude, a chief in Inverness who wanted nothing to do with him or the faith he was proclaiming and in fact locked the gates to his city to keep Columcille out. Columcille persisted and remained steadfast, praying in front of the massive doors, when the gates suddenly flew open as he made the sign of the cross before them. Having witnessed the power of God in this miracle, the formerly closed and resistant Brude now listened and welcomed Columcille into the city. He began to reach people but also saw continued resistance from Druids and other pagans, but breakthroughs came mostly through power encounters as Columcille and his disciples relied on the power of God as they saw modeled with the disciples in the Gospels and the Book of Acts.
One of the most important aspects of his ministry was establishing a center on Iona—a small, bleak, and foggy Island off the coast of Scotland—where missionaries and evangelists were trained to go out with the Gospel. These Celtic missionaries went all over continental Europe proclaiming the Gospel of Christ; they held to justification by faith and the Scripture as the true authority, refusing to involve themselves in politics. Popular misunderstandings not withstanding, they were not Roman Catholic and in fact were very much in conflict with the Catholic Church as they sought to follow God’s Spirit and proclaim the Gospel as they saw it in Scripture. This incensed many a bishop and priest who were appalled at their willingness to enter their areas and preach, as well as their refusal to submit to the Pope and the Roman hierarchy. It seems rather, that these Celtic Christians chose to look at the whole of Scripture recognizing that God led Moses to resist Pharaoh and thus Christians shouldn’t be dictated to by a spiritual pharaoh and took Jesus’ words to heart: "But be not ye called Rabbi: for one is your Master, even Christ; and all ye are brethren. And call no man your father upon the earth: for one is your Father, which is in heaven. Neither be ye called masters: for one is your Master, even Christ. But he that is greatest among you shall be your servant." (Matthew 23:8-11--King James Version)
The studious and prayerful lives of the Celtic Christians led them to be standard bearers during a bleak time when Catholicism slid further and further into a political malaise; they persevered not only in holding to the true Gospel during a time of spiritual darkness but also preserved numerous important manuscripts and important works when the scourge of the Vikings later threw much of Europe and especially the British Isles into havoc. It is why it has been said that “the Irish saved Civilization” during that time.
Columcille was from County Donegal in Ireland, a place we’ve been blessed to visit on occasion and we’ve found out firsthand how rough that sea can be, in both good and bad ways—great surf when the conditions are right but treacherous when they’re not. We were driving through Donegal on one particular trip when I felt the Holy Spirit leading me to turn back towards a place we had just driven past. I wrestled with the why’s for a moment, as did Mercedes. However God’s presence prevailed and we went back to a small set of ancient buildings we had passed, to find not only a church that Columcille was part of, but also a tower that his disciples had later erected to watch for marauding Vikings coming ashore. (Ireland isn’t so great in marking out important historical places.) They had used these towers to not only hide important works but themselves as well from the menacing hordes invading from the north. We took a moment while visiting there to reminisce on that great cloud of witnesses who have gone before us: those who have proclaimed the truth of Christ long before our time. Columcille stands as one of those very witnesses in that great cloud and it is inspiring to know what he did for the sake of the Kingdom.
For further reading click here and for related sources click here.
Posted by Bryan Marleaux at 1:31 AM No comments: