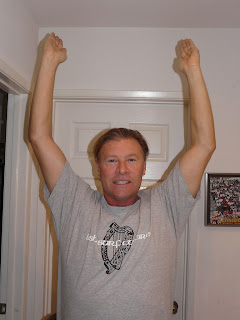 Praise God! 100% range of motion has returned to my injured shoulder which is one of the biggest battles, this after two medical professionals said I’d be lucky to get an 80% return at best, and this with no pain as well as beginning to get strength back. Orthopedic Specialist Doctor said there is no need for the surgery he was previously convinced I was going to need.

When you are in the middle of a dark tunnel and see no light at the end things can begin to feel awfully bleak. However, the Light of the World—Jesus—can break through in the darkest of situations and bring light, life, healing and hope and turn everything around.

Just two months ago I was in the middle of trying to recover from this major shoulder injury that occurred at the beginning of summer (what a bummer!), having dislocated my shoulder while skateboarding with my son, and things were not going so good.

The physical therapist was concerned that my full range of motion wasn’t returning, he had said I'd be lucky if I got back to 80%, and he was the second therapist to say that, I was in pain using ice packs and pain pills regularly and had no strength in my right arm. Then came the appointment with the Orthopedic Doctor who put me into a state of shock by preparing me for the fact that I was almost certainly going to have to have surgery in order to have a full recovery.

He immediately wanted to do an MRI which made me even more worried because everyone else I'd known who had any kind of injury like this had to fight like a dog at a kennel for the last piece of meat to get approved by their insurance for an MRI. The fact that he was so willing to do an MRI caused me more worry because he said, "You have all the signs of a rotator cuff tear which will need to be repaired by surgery but we have to check for sure and the only way to know is to do an MRI." (A two thousand dollar procedure that insurance companies resist approving like North Korea does tourist visas).

If there is one thing God is full of, it is mercy and grace. From Old to New Testament, we see the declaration again and again: “The Lord is compassionate and gracious,… abounding in love. (Psalm 103:8) “The Lord is gracious and righteous; our God is full of compassion...when I was in great need, He saved me.” (Psalm 116:5-6)

At first I was frustrated that I had so much of a time gap to get another appointment with the Orthopedic Doctor and to get an MRI, but then it hit me that this would give me plenty of time to get lots of prayer for the Lord to heal it. There came with the process a lot of further learning about God's healing ways, something He always seems to want to keep teaching us as His children.

Having put out the word that I was wanting others to pray for me many sent messages and words that not only encouraged me but brought a lot of ministry too.

When I was younger and had a knee injury (link to blog) and went to seek prayer for healing for the first time in my life I was expecting some guy on a stage in a suit and tie to yell and jump around and come up and throw my crutches in the air and exclaim I was healed and then I could go out and run a marathon the next day. The healing process was different then than how I expected it to be, and this time around it was different too. In fact, in the middle of it all, I just happened to stumble upon a preacher from the East Coast on the radio who said: "God can heal and do His work in any way or process He chooses. It doesn't always have to happen in one moment—we have to be careful not to put Him in our little human boxes." God used this preacher to communicate about what he was doing and the way He as choosing to do His work.

I have actually experienced instances of immediate healing, like when I was having a severe stomach pain issue that went on for months and months years ago for which I received prayer one day, and I was healed and delivered instantly from that point on, while there have been other times when God's healing took more time and more than one prayer.

In this particular situation with my shoulder, it was a process that seemed like every time I got prayer it got better and then better and better, and certain words and moments of ministry including people praying through emails on the internet and at different churches fellowships and ministries would take it another step forward to where I just began to notice the pain being gone, my range of motion coming back, my strength returning, and my shoulder moving more normally again. There were definite moments when it was being ministered to significantly but equally important—and this is key to understand God's ways—He was using each instance to minister something deep to me spiritually and doing a healing process inside of me as well.

Furthermore, the Lord communicated to me that I needed to cooperate with what He was doing by being diligent with the exercises that I had been given by the therapists.

By the time I had got an MRI and gone to see the Ortho-Doctor again, after getting so much prayer, the signs I'd had showing a rotator cuff tear before had all dissipated; I had 100% range of motion (something that defied what the therapists had predicted) the pain was gone and my strength was coming back. The MRI results showed not even a single tear anywhere on my shoulder, and I didn't need the surgery that the Ortho-Doctor was so sure I was going to have to have last time he saw me.

During one of the times I was receiving ministry for this, I had a picture of Jesus sewing things back together and Him clearly saying that He was healing me. The MRI results showed that he has done just that—Praise God!

I am thankful for what God has done, especially watching others who've had to have this surgery, and man it looks and sounds like a hard thing to endure.

There is still recovery left in that I have three months of atrophy to recover from and the shoulder needs to be slowly restrengthened and some stiffness worked out after not being used regularly for a while; lifting light weights and eating lots of protein are part of the routine for a while, but having a license to eat all the steak, hamburgers, shakes and cakes I want ain't all that bad (ok I threw in the cake which isn't protein but ahh it's close enough.) Other regular exercises like swimming to keep things loose as well as surfing in some small waves on a longboard, which I am stoked to be starting to do again, are all part of the process for a full recovery for a while, none of which I'll be complaining about. 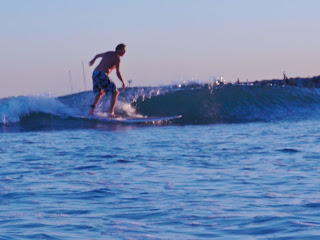 Rehabbing the shoulder in some small longboard waves. The unusually long Indian Summer with warm water, until just recently, has helped with the process since getting a wetsuit off and on can be a bit of a chore.
The big mountain has been crossed and Jesus carried me over by His grace and mercy and I give him all the praise and Glory for it. This is a victory in Christ for all those in the Body of Christ who prayed—THANK YOU. He has answered; thanks be to God in Christ in Jesus’ name!!! Praise the Lord!! Amen!!!

Psalm 103: Praise the LORD, O my soul, and forget not all his benefits - who forgives all your sins and heals all your diseases.

Now we just need to get our finances healed from all these medical expenses, thanks for all your help click here to contribute. Thanks.

(P.S. One of the lessons out of this is the importance of taking time to maintain physical health, otherwise all your time has to go to repair your physical health. We have a video on this topic that we'll put out there when finished with the re-editing process.)

Posted by Bryan Marleaux at 4:34 PM