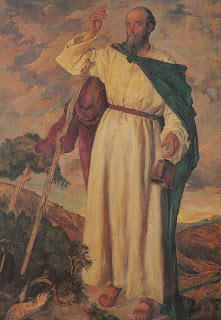 While I was growing up the only thing I ever heard about St. Patrick’s Day was to wear green and pinch anyone who doesn’t. Some kids went so far as to bring pliers to school so they could give a real heavy pinch to anyone who didn’t comply. I remember being held down while given a serious pinch with some pliers on my backside because I didn’t wear green one time, thankfully I was wearing jeans so the pain inflicted was minimized. The only result was to make me not want to wear green even more next time in defiance. Many still want to do the same thing today—give a harsh pinch to any non-compliers or non-conformists who don’t heed to the politically correct status-quo of pop culture.

The view from both popular culture and pop Christian culture is that St Patrick was Irish, Catholic, and chased the snakes out of the Emerald Isle, none of which is true. Over the many long years and decades of involvement in evangelical church circles I never heard anything different there either.

It wasn’t until I was attending Fuller Theological Seminary, working on a Master’s Degree, with a concentration in History, that I ever came across anything about St. Patrick that contradicted the pop culture view.

Once the subject was broached though, the floodgates unleashed a plethora of material from high-level scholars as well as primary sources that was completely different from the popular cultural view.

Jesus’ words stand eternal: “The truth will set you free.” John 8:32. Thus there is an obligation to do one's best in speaking the truth about a situation even if it ruffles feathers. When dealing with a topic like St. Patrick there is no way to talk about the realities of history without stirring some controversy. There are those who seem to revel in being offended, claiming that the mere recounting of actual historical events is an attack on others, or that those who contradict their view of things are intolerant and divisive, all while they act intolerant towards any who dissent from their particular views. Well, they can go ahead and get their pliers ready all they want, but the mandate from the Savior and His Word stands: Speak the truth.

And there is much in the true and real story of Patrick that can help lead and reinforce people towards freedom:

Patrick wasn’t part of the religious system of Roman Catholicism, nor did he seek theirs or other men’s approval when stepping out to do what he saw as God’s will in serving the Lord.

Rather, he was one who was led by the Spirit through a vision to return to Ireland, the land of his servitude, to preach the Gospel. (Get the whole story on our video and web page.)

This conflict was especially inflamed because later Celtic missionaries, much like Patrick before them, didn’t seek approval, covering, or permission from the Pope, Catholic bishops, or priests when they went into their areas on the Continent and preached and evangelized. In fact they are known for driving the Catholic leaders mad with the Celtic missionaries' refusal to seek their approval before entering what they saw as their territories. This caused much heated conflict and animosity between these two groups, which carried on for centuries. So much for the idea of one seamless institutional church; the Christian existence has always been through different autonomous groups.

In the end though, it is the Celtic Christian missionaries with their dedication to the Gospel and scholarship and preservation of many important works that are seen as those who saved Western civilization.

The Celtic missionaries and Patrick before them put into practice the words of Paul: “But when God, who set me apart from birth and called me by his grace, was pleased to reveal his Son in me so that I might preach him among the Gentiles, I did not consult any man, nor did I go up to Jerusalem to see those who were apostles before I was.” Gal. 1:15-17

Patrick’s independent mission to Ireland, which was led by the Spirit and supported only by God, succeeded while Paladius before him who was sent officially by the Institutional Catholic Church with their support and endorsement ultimately failed. Patrick and the Celts, for the most part, put into practice the words and example of Jesus, “But Jesus would not entrust himself to them, for he knew all men. He did not need man's testimony about man, for he knew what was in a man.” John 2:24-25. (link)

During the Reformation the priesthood of all believers was re-emphasized after a long period of neglect. In Scripture we see that Jesus sent out not just the twelve but many others including 72 other people to do the same things He was doing: heal the sick, cast out demons, and preach the Good News. (Luke 10:1-23) In Acts we see that all the community of believers preached the word everywhere they went. (Acts 8:4)

Even with the Apostles, however, we see that a conflictive attitude arose early on from amongst even themselves, who resented others outside their circle who were doing the kingdom work besides them. This exclusive attitude had to be rebuked by Jesus who informed them they shouldn't be trying to stop others who were out doing God's work just because they're not of their particular group, a thing that has happened in history so much. (Mark 9:38-41 & Luke 9:49-50)

Christ’s commission has already been given; He is the King of Kings and the head of the Church . We have God’s Word. The commission stands: Go!! Preach the Gospel, heal the sick, set the captives free. This command and commission is available to whosoever wants to take it up and should be a staple and regular practice for all of the Body of Christ until the day Christ returns.

Wherever you find yourself, whatever you do, remember that as a follower of Jesus you’ve been commissioned already by His word: so be free in your walk in God and step out to lay hands on the sick, take authority over demons and cast them out, and share the Good News. We are to be a priesthood of all believers and have a King who has commissioned us already.

Patrick the missionary to Ireland, as well as the Celtic Christians and missionaries that followed after him are a good example of those that put into practice the priesthood of all believers. Women were not excluded from ministry either like in Roman Catholicism but were included and encouraged to minister and the ministers were permitted to have wives and families.

It is time to recapture the priesthood of all believers and move away once and for all from the idea of some kind of false divide between the laity and the leadership. Martin Luther said this false construct has done nothing but create a chasm and an implacable divide in Christ’s body between leadership and so called lay people, whereas all Christians should be enjoying true evangelical fellowship with each other regardless of position in society or church and no one should consider themselves higher than or “superior” to another. Jesus’ words should be guiding us: "You are not to be called 'Rabbi,' for you have only one Master and you are all brothers. And do not call anyone on earth 'father,' for you have one Father, and he is in heaven. Nor are you to be called 'teacher,' for you have one Teacher, the Christ. The greatest among you will be your servant. For whoever exalts himself will be humbled, and whoever humbles himself will be exalted. (Matthew 23:8) Instead man's traditions tend to replace the Divine Word and we stand again in need of another reformation, and the beat goes on.

The Celtic church was later absorbed into Roman Catholicism due to political pressures, and Patrick’s memory was altered when he was made a saint to win the hearts of the Irish to the Catholic Church. The remnant of Celtic Christianity was further erased by the invasion of the Vikings later; however; it was the Celts who helped to evangelize these brutal barbarians (to watch or listen to our program on this follow this link and search for "Conversion of the Vikings.")

History is unfortunately often remembered from the view of those who write it and thus since the Celtic Church is no longer in existence the real story is only found through digging into scholarly works.

Once we come to know the truth of this story, however, it really does reinforce that biblical paradigm of the freedom of the believer from the bonds of bureaucratic, institutional, and tradition-bound religiosity like the Pharisees promoted, and instead it reinforces the Bible’s words which lead us back to that organic, relational, fellowship and vision of knowing, and walking with, and simply following Jesus the Savior, who still calls out, “Come follow me.”

Go ahead and get your pliers ready if this offends your sensibilities. Just be forewarned though, that my skin has grown quite a bit thicker these days, and I’ve learned a bit about defending myself, so just be aware, I might just pinch back.