We recently returned from ministering in the Central Coast area of California:

When we are traveling, we have to stay in the occasional roadside motel. Every now and then divine intervention takes place and it turns into an evangelistic experience:

We happened to come back to an uncleaned room at the ole Motel 6 so Mercedes requested a maid to come and take care of it while we were there in the room. As the maid cleaned things up, I kept having lines from our old friend and mentor Harald Bredesen pop into my head, and sensed it was the Holy Spirit who was stirring me to witness to this woman.

She didn't speak English so I did my best in Spanish for a bit and then Mercedes began to help out. Using Harald’s line, we inquired: “Do you know who said you must be born again?” We were not surprised to find that even though she was Catholic she had never heard Jesus’ central message before.

She was very open and listened with attention to what we said. After taking some more time to explain the Gospel to her she opened her heart and we prayed with her, there in the room, to receive Jesus Christ as her Lord and Savior!! Hallelujah! We also prayed for the Holy Spirit to empower her! We got her info so we could send her stuff on local churches and Scriptures to read.

On the way driving back we passed by another motel where we led a maid to the Lord just about a year ago, and thought of another old friend and mentor of ours, Lonnie Frisbee, who would have surely laughed and said, “I think the Lord is giving you a maid ministry!”

Central Coast Ministry and Beyond

We ministered at both Pearl Chapel in Shell Beach which is right next to Pismo Beach and part of what is called the Five Cities region, famed for clams, sand dunes, and cold weather even in summer. We also ministered at IV Church in Isla Vista which is just north of Santa Barbara.

We were asked to share about our own experiences of being filled with the Holy Spirit which is always a fun story to recount for both of us as both Mercedes and myself both experienced the filling of the Spirit in what would become known as the Vineyard Movement.

We were blessed as we ministered to see many get filled with the Holy Spirit at both places, as well as encouraged, renewed, and empowered, to “do the stuff” as John Wimber used to say.


As an example of what the Lord did at those churches as we ministered: there was a young man who grew up around Korean churches where he had heard about the Holy Spirit but desired more than just hearing about this, he wanted to be filled and empowered. When we prayed for him, he was immediately filled, overcome and fell down to the ground, and then began to speak in tongues. After some time soaking it all in he came up quite filled with joy; he had finally experienced and received it for himself!

A guy we know named Scott came up at IV (as we began to minister) and spontaneously told how he had been filled with the Spirit of God back in 2010-2011 when we laid hands on him and prayed for him. He shared how when we prayed for him he got filled with God’s power and received tongues and was launched into a six-year journey of encountering God in a new way in his life. He encouraged others who might be a bit timid or who might be unfamiliar with all this to come and receive as well.

It was a blessed time as the Spirit of the Lord filled many and equipped and empowered people at both places! 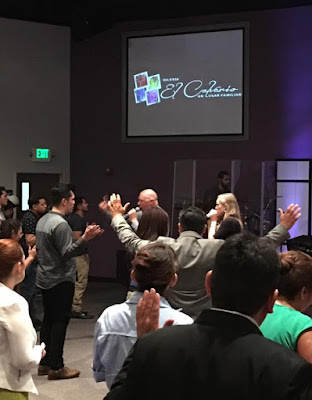 On our return from the Central Coast we ministered out in the Inland Empire at IEC where the pastor was encouraging the congregation to also be equipped and filled with the Holy Spirit ( an important theme that the Holy Spirit is highlighting lately), and we were again stoked to see so many there being filled and empowered not only during the ministry time but there were also two spontaneous afterglows that took place on the way out, where the Lord brought forth surprising and unexpected moves of power as we ended up praying for more people on the way to the car! Glory!

Appearance in a New Book

Our friend Roger Sachs, one of the founders at Pearl Chapel recently finished the book Not By Might Nor By Power: The Great Commission, the second in a series on one of the main evangelists of the Jesus People Revival, Lonnie Frisbee, for which we were blessed to write an endorsement in the beginning of the book. We are also mentioned later in the book regarding how I (Bryan) got filled with the Holy Spirit in the early days of Calvary Chapel Yorba Linda, which was later to become Anaheim Vineyard.

If you want to relive some of those early days and get the low down on how Lonnie Frisbee was instrumental in the early days of Calvary and Vineyard, as well as how he actually was the one who started Greg Laurie's church Harvest Christian Fellowship out in Riverside, check it out!

Having roots in both Calvary and the Vineyard we see the importance of keeping both the Word and the Holy Spirit at the forefront of things.

Much love and blessings!
Bryan, Mercedes and Patrick Marleaux

Posted by Bryan Marleaux at 5:07 PM No comments: