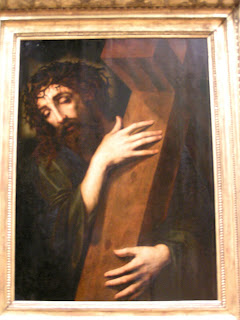 Listen to our Good Friday and Easter audio message
One of history's most dramatic trials played out as the the son of a carpenter stood before a son of the glorious Roman Empire. Pilate, stunned by what he was presented with when the very King of Glory stood before him on trial, still failed to see what true glory was really all about, and gave way for the Son of God to be crucified as a common criminal even though he himself declared three times that he was innocent of any charge:


How a Roman Governor whose word is as good as law could still allow someone, much less Jesus Christ famed for healing and helping the sick and downtrodden, to be crucified when he himself just declared three times unequivocally to be innocent of any charge, is one of history's great enigmas.

The answer to such perplexing enigmatic circumstances is found in Jesus' own words: "I lay down my life--only to take it up again. No one takes it from me, but I lay it down of my own accord. I have authority to lay it down and to take it up again." (John 10:17-18)
Christ laid his life down that we might have forgiveness, redemption, and life. God made him who had no sin to be sin for us that we might become the righteousness of God (2 Cor. 5:21). True redemption, mercy, and grace are found only in Him!
(For Further Reading: In this dramatic trial of Jesus before Pilate we see the perplexity of man's condition: Created in God's image but so bound to sin we must be redeemed from this fallen state, thus the cross was absolutely necessary for our salvation due to our utter depravity, but praise God Jesus has come and paid the price that we might be freed and have life --read more by clicking here.)

Posted by Bryan Marleaux at 4:57 PM No comments: